This event is happening now.

Community members are invited to join the conversation virtually through web conference on Thursday, September 9 from 5:00 to 6:00 p.m. ET. 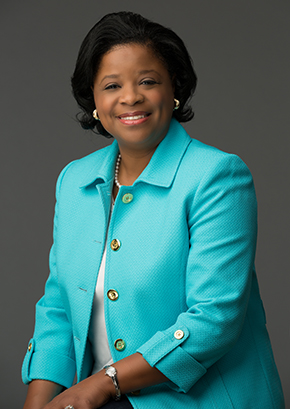 Shan Cooper is the Executive Director for the Atlanta Committee for Progress. The ACP was founded in 2003 and their mission is to provide leadership on key issues important to economic growth and inclusion for all citizens in the City of Atlanta. The committee includes more than 40 highly engaged chief executive officers, university presidents, and civic leaders who offer expertise in service to Atlanta and its future development.

Shan is the former chief transformation officer of WestRock and was responsible for the Recycling and Waste Services Division, Procurement, Enterprise Logistics, and Information Technology.

Prior to joining WestRock, Shan served as Vice President and General Manager of Lockheed Martin Aeronautics Company. As General Manager, she was responsible for the 6,000 employee operations in Marietta, Georgia; Meridian, Mississippi.; and Clarksburg, West Virginia., which designs, produces, modifies and maintains military aircraft for the U.S. and countries around the world. Marietta programs included the C-130J Super Hercules, F-22 Raptor, P-3 Orion, C-5M Super Galaxy and F-35 Lightning II.