Building Social Equity Into the BeltLine: An MBA Student Reflects on a Year of AB67 Service

Twenty years ago this month, Ryan Gravel, at the time a Georgia Tech graduate student, submitted to the School of City and Regional Planning his master’s thesis, Belt Line Atlanta - Design of Infrastructure as a Reflection of Public Policy. It would be nearly a decade until I became familiar with the work. Back in 2000, I was a middle school student in the suburb of Marietta, Georgia. I thought of the City of Atlanta as the place with the airport, Braves, Falcons, Hawks, and Thrashers (I miss you). But the big city twenty miles down I-75 was also in my heart.

Partly due to my strong connection to the city and my home state, when the time came to apply to colleges, Georgia Tech was my first choice. I felt extremely proud to be selected off the waitlist. This admissions decision, in fact, laid the foundation for my life. After graduating with a B.S. in Industrial Engineering in 2010, I served four years in the U.S. Marine Corps. When I left the Marine Corps, I wanted to come back to Tech to pursue two more degrees: an M.S. in Operations Research and an MBA.

During my years of service, I had lived in Virginia, North Carolina, and for a short time in Afghanistan. I had not spent any quality time in Atlanta. When I came “home” in 2015, I quickly noticed that the city felt...different.

In my undergraduate days, Buckhead was pretty much the only neighborhood people talked about. Now, I regularly heard about communities such as the Westside, Inman Park, Old Fourth Ward, and East Atlanta Village. And there was this new thing called “The BeltLine.” When my friends wanted to go out, they would often choose a location based on a reason that had not existed when I last lived in the area. “Let’s go to x,” they’d urge. “It's on The BeltLine.” The project to transform the former railway corridor around the city with trails was (and is) still very much in-progress. However, the completed sections had quickly led to vibrant growth and activity in surrounding neighborhoods. 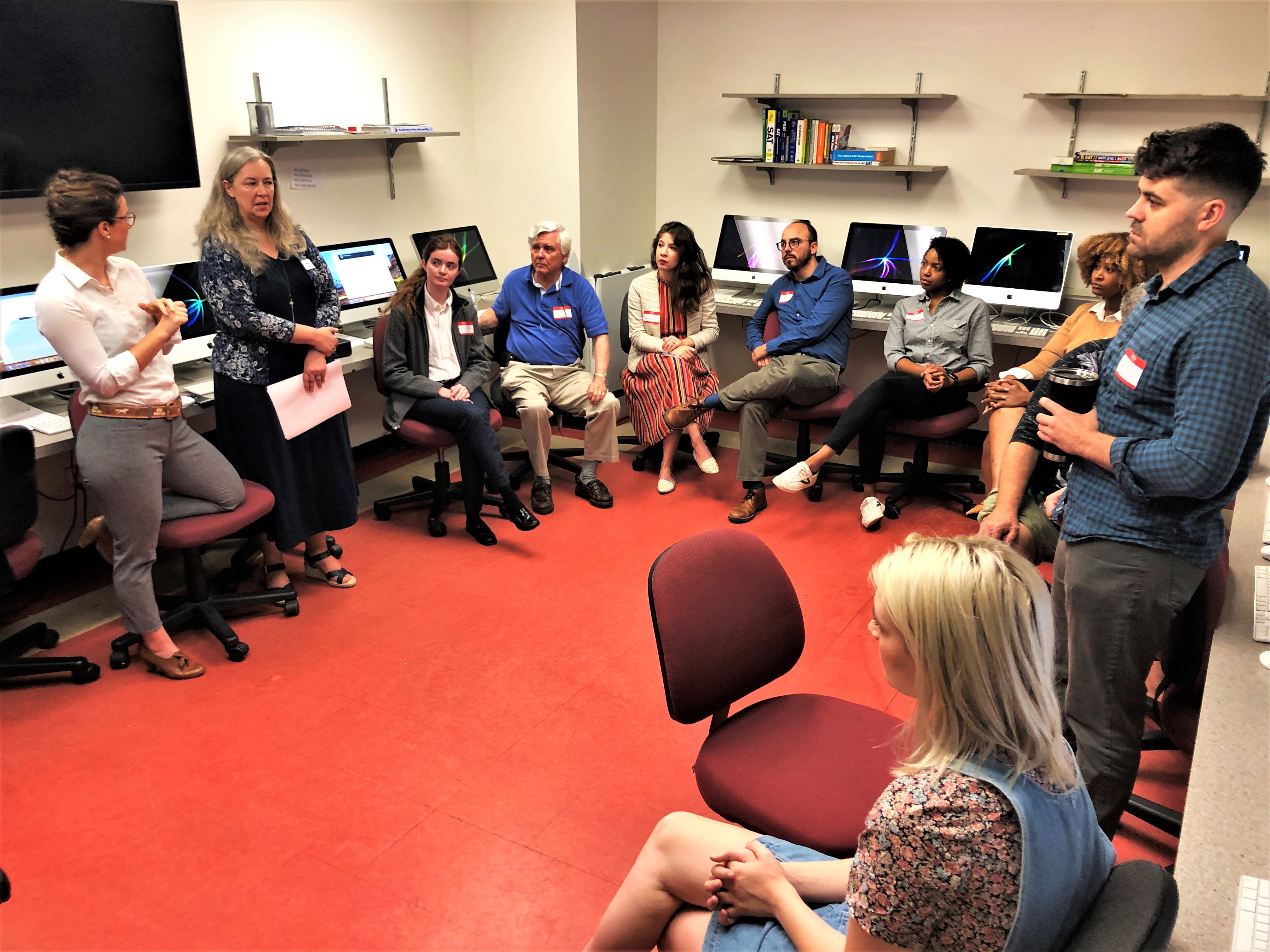 Stephen Spicher (far right) facilitates a workshop for homeowners near the BeltLine.

I discovered that the Institute for Leadership and Entrepreneurship and the Net Impact at Scheller College of Business - MBA Chapter sponsors a Board Fellows program, which exposes members to nonprofit management and governance by placing them as non-voting board members at local nonprofits. I saw the fellowship as an opportunity to give back to my city.

Specifically, I was interested in joining AB67, a young professionals board that is a component of the Atlanta BeltLine Partnership (ABP). A similar feeling came over me like when I knew I wanted to go to Tech or to join the Marines. The BeltLine was an entity in which I firmly believed—and I knew without a doubt that I wanted to be a part of it.

I did not want to join AB67 just because the BeltLine has a bunch of good hangout spots (although it does). What drew me to the BeltLine was its foundation on all three pillars of sustainability: social equity, economic viability, and environmental protection. During my time in the Marines, I had learned about the importance of all three pillars without even realizing it. In Afghanistan, for instance, one of my responsibilities was to negotiate with local landowners for the use of their land for our various bases. The idea that both parties were equally reliant on each other for economic and physical safety made me realize the importance of connecting with your neighbors in order to develop a community that can benefit everyone. The BeltLine’s mission of creating equitable, inclusive, and sustainable city life aligns perfectly with values that were instilled in me on my deployment.

I was thrilled to be selected as a Board Fellow, which involves a two-year commitment to AB67. The Ray C. Anderson Center for Sustainable Business provided a small grant to cover my participation costs. For my first year (2019), I decided to focus on the BeltLine’s impact on social equity.

One of ABP’s most important functions is to ensure that the construction of the BeltLine and the growth it spurs does not destroy the neighborhoods it is meant to connect. We empower existing homeowners along the BeltLine with tools, knowledge, and assistance that can help to keep them in their homes. The rapid increase in property values along the BeltLine threatens to price these residents out of their homes and communities. As area property values rise, so do property taxes. I have contributed to two property tax workshops in which board members help homeowners assess their property tax bills and file appeals if appropriate. The majority of the people we assist have been in their homes for decades. Many people arrived at the workshop looking worried. They were uncertain about their options. Very few of them were aware that property tax assessments could be appealed or that they could file for a homestead exemption. When residents left the workshop, many were smiling. I felt a bit like I did when I helped others while in the Marines, except this time I was making a difference in my own city. 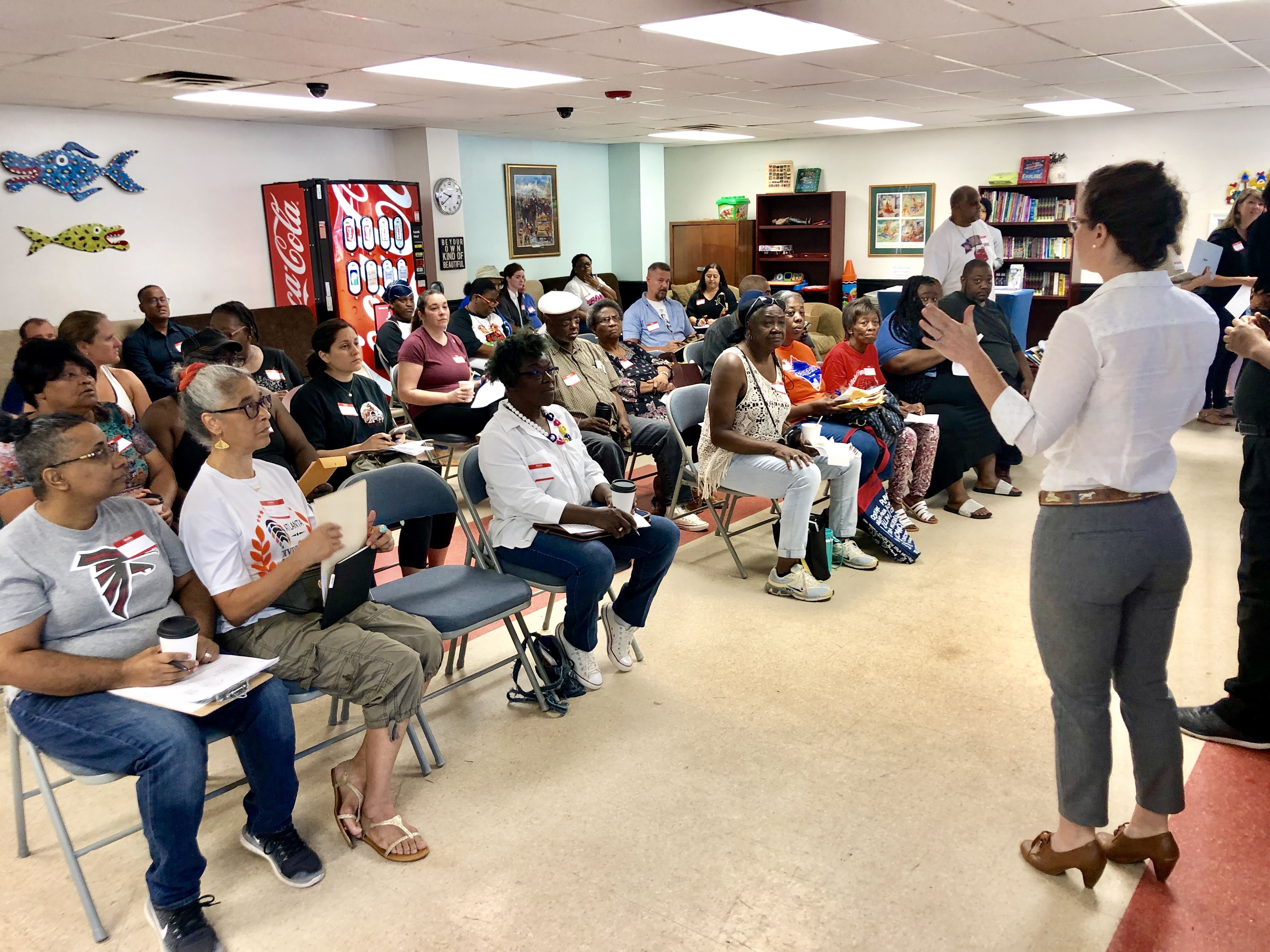 I am proud that ABP had the ability to change homeowners’ outlook on their future. Yes, we gave them the hope of paying a lower tax bill. More than that, we gave them a clear understanding of their home’s value—and informed them how the value boost from the BeltLine can benefit them and their families. Most importantly, we reminded them that the City of Atlanta and the BeltLine above all want to help their neighborhoods.

It has been a great privilege to work alongside fellow AB67 members for the past year. Almost all of us are native Atlantans looking to give back to our city. The BeltLine is a perfect example of a project that fully embraces sustainable urban growth. Once the project is completed, it will unite 45 neighborhoods with 22 miles of disused rail corridor. The BeltLine has been a business boon within the perimeter and has created an interconnected network of unique and lively neighborhoods that can be reached by foot, bike, or scooter. More than ever, I’m proud to call Atlanta home.

Stephen Spicher, who is from Marietta, Georgia, is a second-year student in the Full-time MBA Program at the Scheller College of Business. He is a “Triple Jacket,” having received his B.S. in Industrial Engineering in 2010 and his M.S. in Operations Research in 2019 from Georgia Tech.