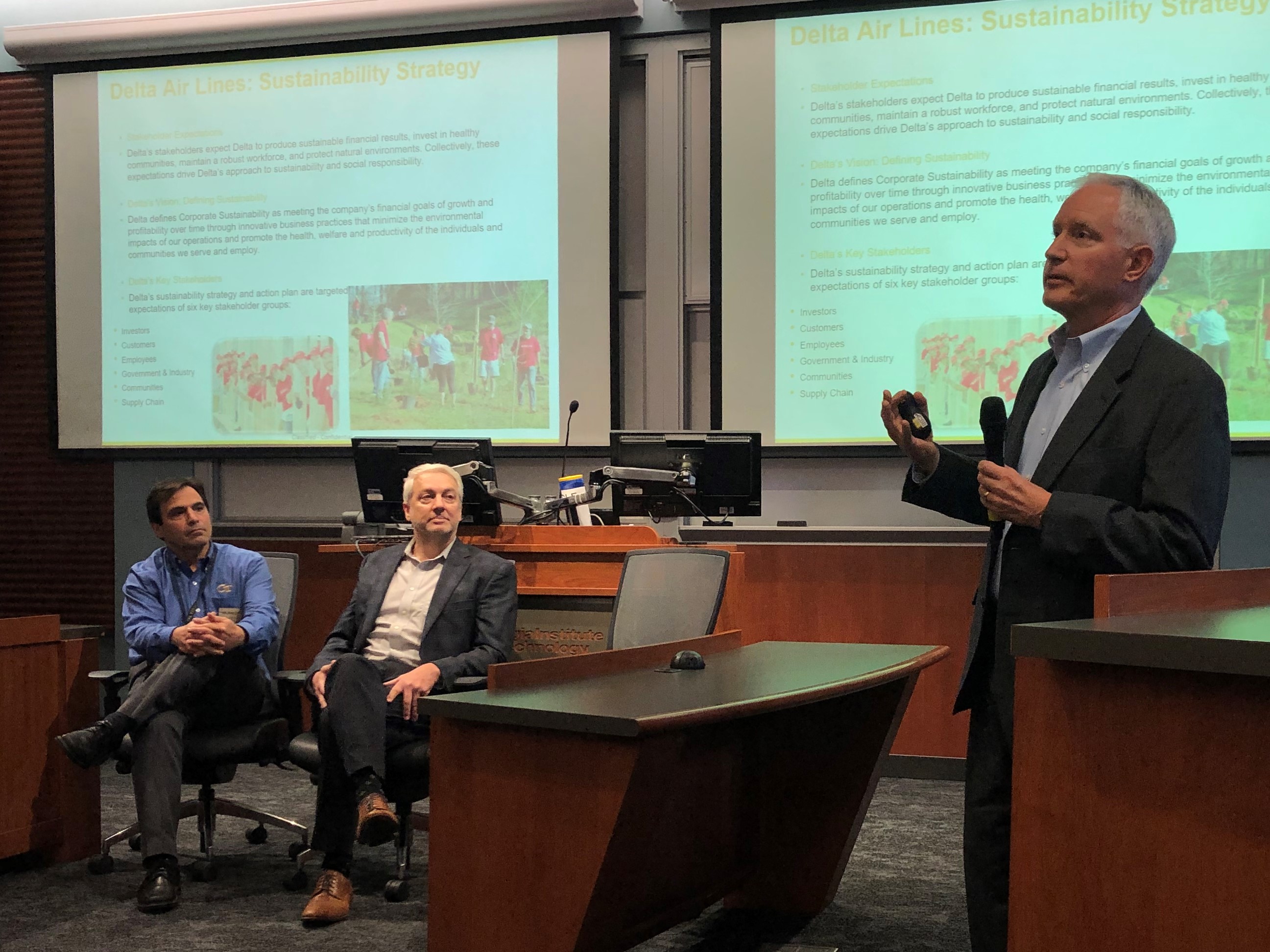 Sustainability experts shared their wisdom during the second annual sustainability in careers panel for undergraduates at the Georgia Tech Scheller College of Business. The April event was hosted by Ravi Subramanian, associate professor of Operations Management, in his class, Business Decisions for Sustainability and Shared Value.

To help students visualize possible career trajectories, Oxman introduced the “three lanes” concept. In the traditional lane, an employee serves a core business function that is not itself focused on sustainability; however, knowledge of sustainable business will enrich the employee’s contributions. A role in the hybrid lane is more or less in a core business function but has some focus on sustainability. In a focused lane, the vast majority of an employee’s work involves coordinating or executing on the company’s most material sustainability issues.

“You’re not necessarily in one lane forever. If you’re really interested in sustainability, you can weave in and out of sustainability roles,” Oxman claimed. He emphasized to the undergraduates that studying sustainable business is a long-term investment in their careers.

The speakers discussed sustainability developments within their organizations and offered career advice based on their own trajectories. Panelists stressed the value of acquiring work experience in core business functions, especially early in one’s career. They also agreed that demand is growing for employees with training across a broad range of sustainability topics.

You don’t have to have ‘sustainability’ in your title to be doing sustainable activities.

Oxman, who spent over 25 years working at the intersection of international business, sustainability, and risk management, now teaches business sustainability courses, facilitates industry outreach, and implements educational initiatives. He said, “Sustainability has evolved quite a bit since it first came on the map. It started with the environment but has expanded to encompass social, economic, and cultural impacts.”

Increasingly, corporations have also shifted the why behind their sustainability goals. Originally viewed through a risk-oriented lens, sustainability is now addressed as an upside. For instance, it may be a way to engage with customers or to provide an opportunity to create new products or services to address sustainability issues.

At Delta, Tochilin, who has 40 years of work experience in environmental health and safety, champions efforts to reduce environmental impact and to engage employees and customers in environmental initiatives. “My team’s main goal is to be a positive force for change,” he said.

Tochilin said, “People travel because they want to see the world. Therefore, we have a vested interest in the environment.” Delta has a climate change work plan, and it buys several million carbon offsets per year.

Stakeholders are speaking up more and more, asking Delta what it is doing to address risk from climate change. Tochilin also told the undergraduates that customers are driving change. He said that people their age who are passionate about environmental issues are asking questions such as, “Should I be Skyping instead of traveling for a meeting?” and “What type of plane am I booking, and how is its fuel efficiency?”

Employees in every imaginable role at Delta are being positive forces for change. “You don’t have to have ‘sustainability’ in your title to be doing sustainable activities,” said Tochilin. “At Delta, for instance, you might be a pilot who performs a low-power take off or a flight attendant who volunteers to recycle onboard. It can be your goal to make sustainability contributions no matter where you are in the company.”

Radtke spoke about how The Coca-Cola Company focuses on being proactive rather than reactive. “It is so rewarding when you work for a company the size of Coke. We have a voice, and people listen,” Radtke said.

He said his career followed a “squiggly line”: He studied geology as an undergraduate and hydrogeology for his master’s degree. Though he began his career as a consultant in technical areas, as an avid outdoorsman he always had the environment in the back of his mind. He eventually landed in his current position at Coca-Cola, where his primary focus is to guide the company in preserving the earth’s resources.

Water, the number one ingredient in Coca-Cola products, is always at the top of the sustainability list. As a result, the company is committed to giving back, or replenishing, all the water it uses by partnering with a number of NGOs on watershed restoration projects and supporting clean water access projects in underserved communities.

“We also know packaging and plastics in the environment is a problem, and we want to be a part of the solution,” Radtke said. He described Coca-Cola’s World Without Waste initiative, which has three main goals: to recover and recycle the equivalent of 100 percent of the cans and bottles it sells, to make sure all of its packages are 100% recyclable, and to ensure that packaging is made of at least 50 percent recycled material by 2030.

Panelists agreed that most people interested in sustainability begin their careers in traditional or hybrid roles. Tochilin encouraged students to volunteer as a way to get their foot in the door. He said, “Show your effort and enthusiasm. Then, when jobs become available or are created, you’ll come to mind.”