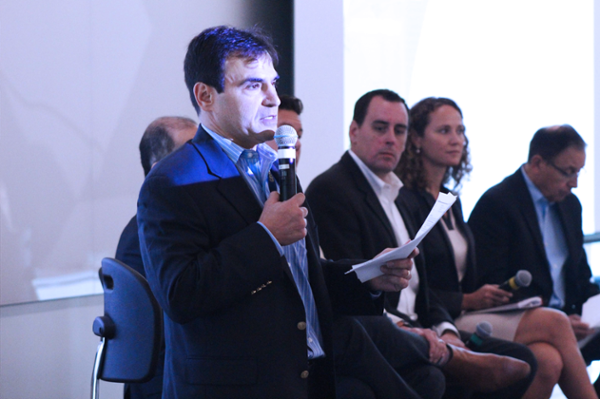 On September 27, faculty affiliated with the Ray C. Anderson Center for Sustainable Business at Georgia Tech Scheller College of Business (“Center”) participated in the Global Climate Action Symposium. The event brought together scientists, engineers, government delegates, artists, business and policy experts, activists, and students from around the world. It was jointly sponsored by Georgia Tech and six European consulates during European Climate Diplomacy Week, a time for EU delegations and embassies around the world to hold events to encourage communication and action related to climate change.

The event was organized by the Global Change Program, which was launched in 2018. The program’s Director, Kim Cobb, Georgia Power Chair and ADVANCE Professor in the School of Earth and Atmospheric Sciences, told close to 200 attendees (plus 100 people who watched via livestream), “We have an impactful community at our fingertips at Georgia Tech and beyond. I hope this is the first of many such events to build shared dreams together.”

Cobb introduced Georgia Tech President Ángel Cabrera, who just a few weeks into his new role has already taken a bold position on the responsibility of higher education institutions in supporting sustainability efforts. Cabrera is one of the founding members of the University Global Compact (UGC), a platform of higher education organizations committed to working together in support of the United Nations Sustainable Development Goals. Just a few days earlier, Cabrera and a group of Georgia Tech sustainability leaders had participated in the UGC’s 17 Rooms-U event. He described that, to him, being a “global” institution “is about trying to make solutions for problems that affect all of us.”

The symposium was the first major event to be held in Georgia Tech’s new Kendeda Building for Innovative Sustainable Design, which was designed and constructed to the standards of the Living Building Challenge—the world’s most ambitious green building certification program. Building Director Shan Arora opened the public symposium by saying that the space, which attempts to give back more to people and the environment than it takes, can be a catalyst for change not only on the Georgia Tech campus but also in the state, the country, and the world. Arora said, “To take action, we need hope. And this building is an example of hope.”

Center leaders and affiliated faculty participated in the first part of the day’s agenda, which was separated into three sections: “Science, Technology, and Policy,” “Student Engagement,” and “Art and Climate Future.”

Center Faculty Director Beril Toktay moderated the “Science & Engineering Panel Discussion,” which included panelists from Georgia Tech and Emory University. The overarching emphasis was on how bringing a diversity of perspectives to the climate action table can help to build bridges that can lead to impact. The speakers shared the paths that led them to their work related to climate action, and they described how they made connections between different academic disciplines as well as between the university and the community.

Eri Saikawa, associate professor in the Department of Environmental Sciences at Emory University, addressed the challenging issue of climate communications and highlighted the value of the younger generation reaching out to their peers to discuss climate change. “It’s important [for the facts] to come from someone in one’s own generation,” she said. Zachary Lancaster, a PhD student in City and Regional Planning at Georgia Tech, later encouraged attendees, “Just be willing to push yourself to talk to somebody you wouldn’t normally talk to…There’s a lot of power in speaking to people honestly about your opinions.”

The next session was the “Business & Policy Panel Discussion,” moderated by Center Managing Director Michael Oxman, who set the tone by describing how industry has played a tremendous role in helping to raise the standards of living around the world—while at the same time creating and/or exacerbating a range of global environmental and social impacts with which we must come to terms. He referred to Ray C. Anderson—the industrialist who was transformed into one of corporate sustainability’s greatest champions—as an exemplar of how business leaders can be key players in addressing our greatest societal challenges. 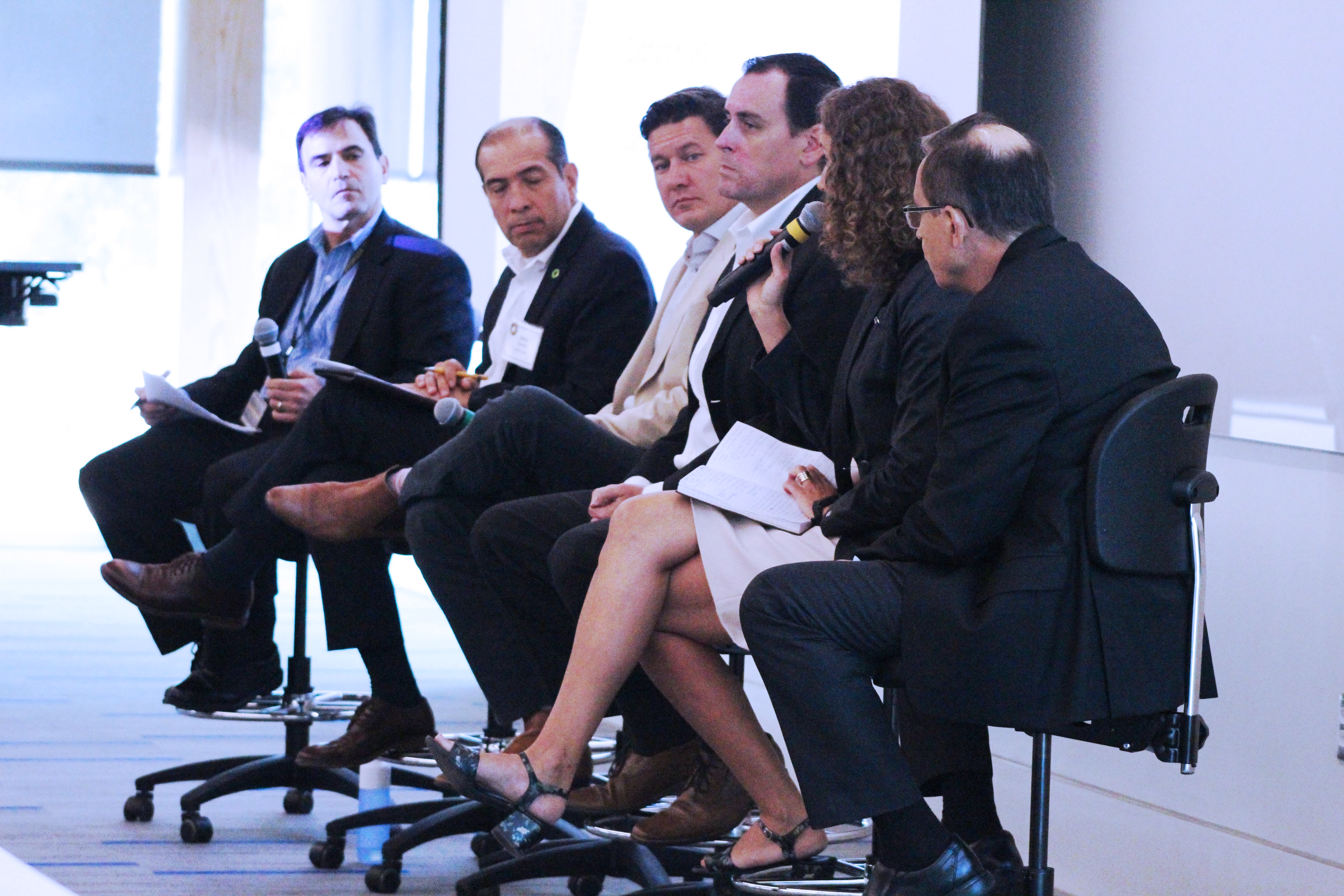 A discussion on industry’s role in climate change is moderated by Michael Oxman (far left).

Oxman provided encouraging information about companies “doing well by doing good” but said we need a much more rapid timeline for climate change action. The panelists explored how to shape a nexus between policy and business worlds in order to find urgently needed solutions. Center-affiliated faculty member John McIntyre, executive director of GT CIBER and author of CSR and Climate Change Implications for Multinational Enterprises, spoke about the opportunity for large, multinational enterprises to be “diffusers of change.” He said, “As we search for corporate standards, we must identify global and binding structures that can bring about rapid change.”

The second segment of the day, which focused on students, included presentations by youth activists and a viewing of a film, Fridays for Future, in which students from around the world are interviewed about their participation in the school strike movement (sparked by Greta Thurnberg) that aims to raise awareness of climate change. The final discussion of the day revolved around how artists are responding to climate change. Gwenola Wagon, artist and assistant professor at the University of Paris 8, remarked on the transformative power of art: “If you don’t have any imagination of the future, you can’t change the way of life. Artists are necessary…to change how we think about something.”

The symposium made a strong impression on Blais Hickey, a second-year student in the Full-time MBA Program and president of the Net Impact - MBA Chapter at Scheller College. She remarked, “While attending the symposium, I realized, this is why I chose to pursue my master’s at Georgia Tech. Few universities can pull together such an intelligent, diverse, and impactful group of panelists. Sitting in the new Kendeda Building and being surrounded by so many changemakers was a powerful experience.”

Undergraduate Casey Erb (CE ’20, Denning T&M Program ’19) reflected, “I think the biggest hurdle we face as a species is overcoming the cognitive dissonance hurdle: realizing that we’ve been treating our planet poorly and a business-as-usual approach is not sustainable.” He continued, “The value of this symposium is that it creates agents for progress by inspiring optimism in the face of the inconvenient truth.”