When Everything Clicks: An Undergraduate Reflection on Discovering Sustainability at Tech 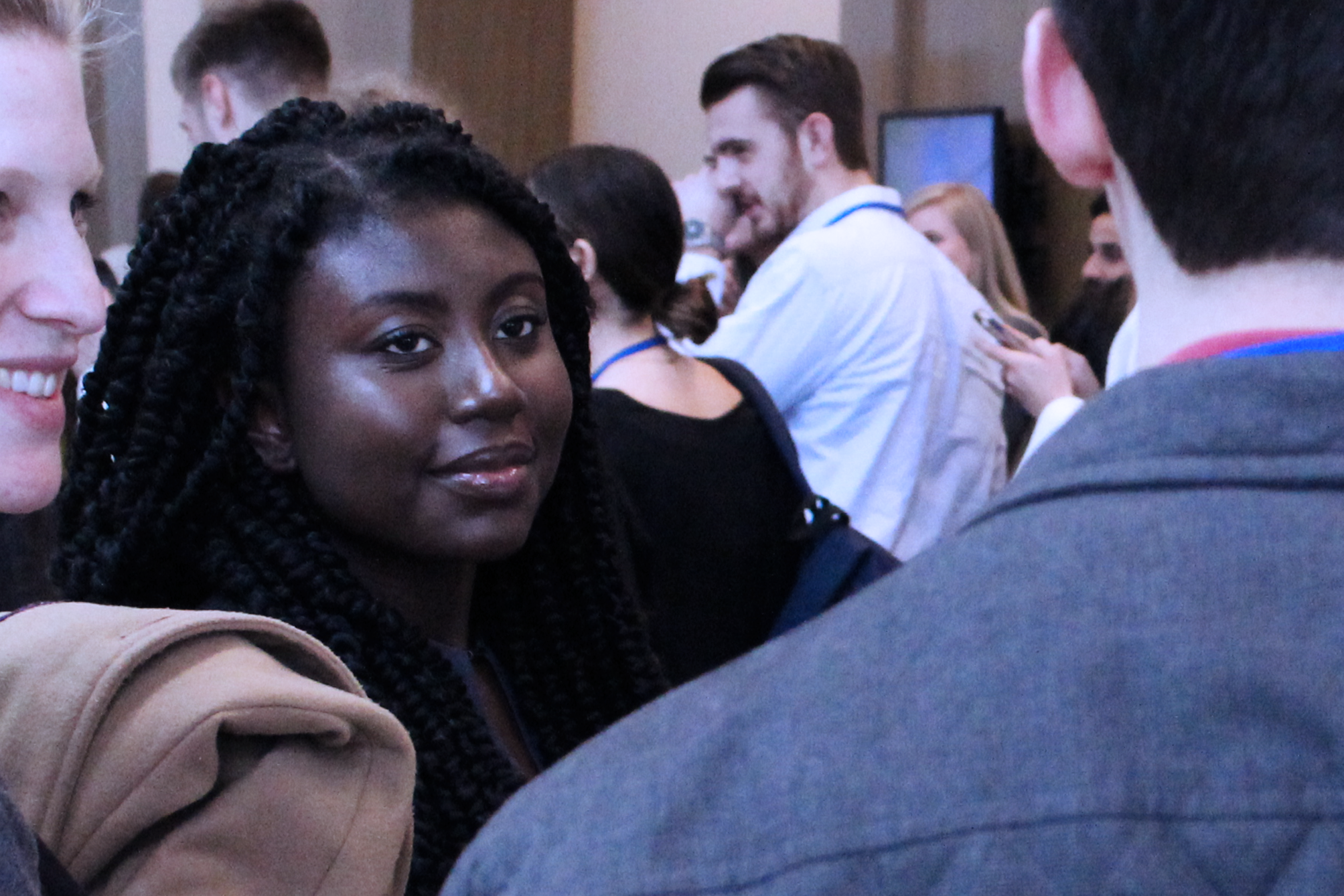 Last October, I was on a plane headed to Detroit, Michigan, on an all-expenses paid trip to the Net Impact National Conference. A year ago, if you had told me that I would be selected to serve as a Georgia Tech undergraduate ambassador for one of the world’s biggest sustainability conferences for students and professionals, I would have said, “Sounds great, but I doubt it!”

Life can certainly surprise you!

I come from Columbia, South Carolina. It’s a sweet but quiet town. I dreamed of attending Georgia Tech. I wanted to experience Atlanta, a city that figured prominently in the civil rights movement. Also, I thought a design major would give me the opportunity to leave the world better than I had found it. My parents, who had emigrated from Sierra Leone, made me understand the value of education. When I was accepted to Tech, all three of us cried.

Although I did well in school growing up, Tech was a shock. I struggled with grades, missed the humanities classes I had loved so much in high school, and as a first-year student was not able to take courses related to my major. Nothing was “clicking.”

Then, I discovered Serve-Learn-Sustain (SLS), and everything changed. I signed up for the Minor in Sustainable Cities and also got involved in the Innovating for Social Impact Program. Taking courses that related to sustainability got me excited about school again. My passion was back!

One of the first SLS courses I took was SLS 3120: Foundations of Sustainable Systems, in which students contributed to the Climate Stories Project for Fort Valley, Georgia. My team worked with the Partnership for Southern Equity on the specific problem of energy burden. One day, our team attended a community meeting where leaders talked not only about energy burden’s impact on their community but also about water contamination affecting mostly poor, black neighborhoods. Hearing about environmental justice activities in Georgia got me thinking about how I could apply my major to working on these types of projects.

My extracurricular activities related to sustainability blossomed, too. I became active with the Women of Color Initiative, Engineers for a Sustainable World, Youth Democratic Socialists of American, and campus mental health initiatives.

One day in my Sustainable Systems course, Kjersti Lukens, the program support coordinator for the Ray C. Anderson Center for Sustainable Business (“Center”), came to talk about a student group that was being resurrected at Tech—the Net Impact Scheller College of Business - Undergraduate Chapter. The group empowers students who want to use their careers to make a positive change in the world. I reached out to Kjersti, and before I knew it, I was on the chapter’s executive board! 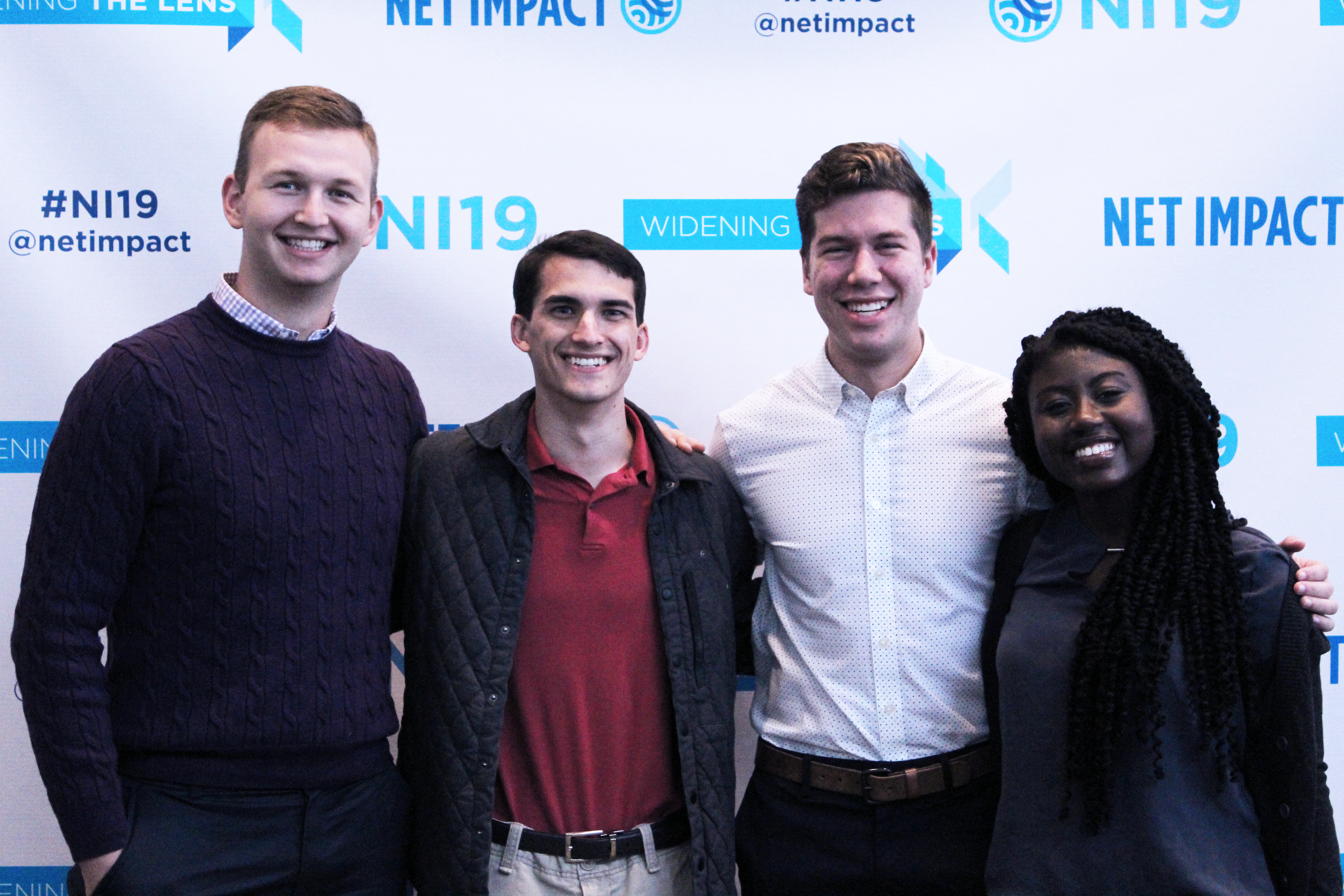 At one of our meetings, I learned about the upcoming Net Impact National Conference in Detroit. All five members of the board were given the option to attend—with full financial support from the Center, which sponsors our chapter.

I jumped at the opportunity! At the conference, I heard talks by industry professionals who described what it took to take them from being hopeful college kids to prominent changemakers. I had countless opportunities to network with likeminded people. I got tons of insider advice on how I, too, could make an impact.

I was especially impressed by a keynote address by Veronika Scott, founder and CEO of The Empowerment Plan. Scott had started out like me—a college student working in design and city planning. She and her peers were working on a project that would make an impact on society. They were studying in Detroit, where the winters are especially cold. The team decided to create a useful item for the homeless: a coat that could transform into sleeping bag if the individual was stuck in the elements.

Scott said that one day, her group was scheduled for a team visit to a homeless shelter in a rough part of town. She arrived at the shelter and waited two hours for her peers to show up—but they never did. She decided to get feedback from the group’s target audience by herself. The man at the front desk buzzed her in, led her into the TV room, turned off the TV, and said, “Here’s a student. She wants to talk with you about coats for thirty minutes.”

Everyone in the room got upset. Scott said, “I need your input so I can do well in my class.” One of the residents said, “Well, I want to watch Maury!” She melted into the corner. But she kept going back to the shelter, again and again, because she was devoted to getting feedback that would help her design the prototype for the coat. It took a year to make one coat.

One day, a woman who stayed at the facility said, “I don’t want a coat. I want a job.” Scott started to see how the coat was a Band Aid to systemic issues of homelessness. She pivoted in her project and created a program in which the people hired to create the coats are underserved women at risk of becoming homeless. Now, these women have jobs and access to other resources, such as those for housing and education.

Scott’s story really resonated with me. One small idea from a school project turned into something that impacts so many people in a positive way. It reminded me of my Sustainable Systems class in which the professors emphasized the importance of addressing deeper issues that cause the surface problems.

I returned from Detroit feeling empowered. I had met people who had made their dreams of building a better world a reality. I now see the future in front of me—and have a game plan for how I can make my own mark.

By Almi Mansaray. As told to Jennifer Holley Lux.

Almi Mansaray is a third-year engineering major at Georgia Tech.