Advocacy in Action: A Reflection on a Year of Serving as a YWCA Policy Advocate 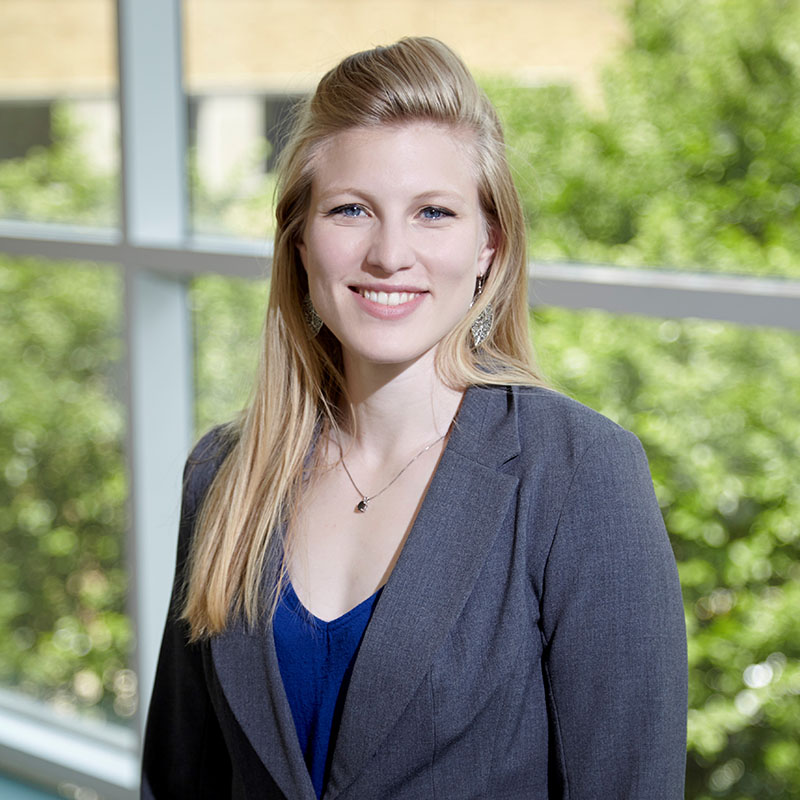 I am a millennial. And a common theme for millennials (to me) is perpetual systemic change. Thanks largely to our advancing technology and globalization, I feel as if every day I am learning more and more new truths that challenge established beliefs. For example, being “sustainable” has changed in many ways. Gone are the days of sustainability being only about saving trees and recycling. These days, it is also about things such as human rights and product creation. Yet change is harder in practice than in theory. One way to adapt to this change and make it equitable is by setting laws and policies. Yearning for a foundation in our current climate and an opportunity to become a more engaged citizen, I decided to look for a way to refresh my knowledge about what it takes to create a policy or law. 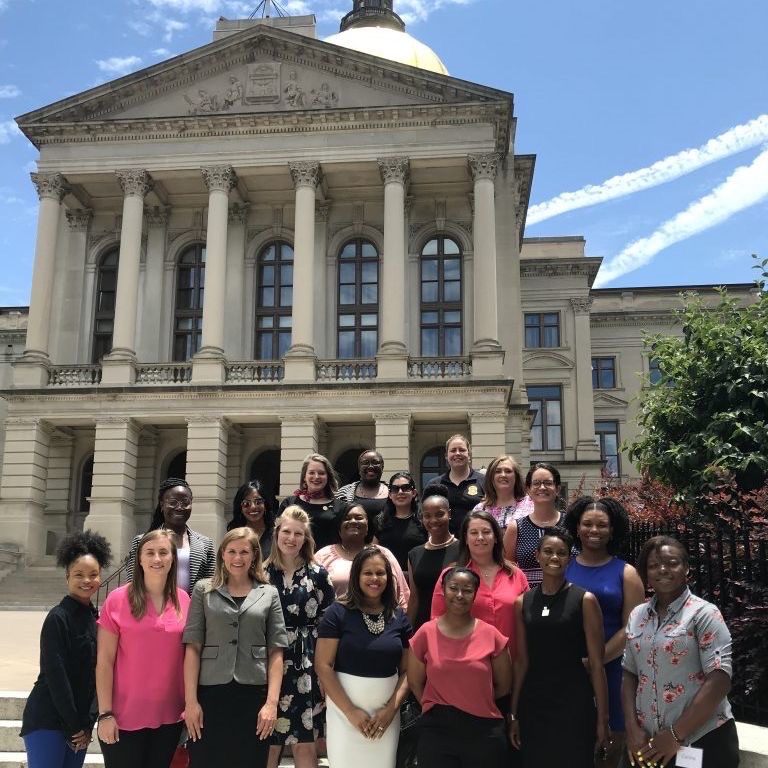 On May 30, 2019, the 2019-20 Fellows of the Georgia Women’s Policy Initiative gathered for their first session at the Georgia State Capitol.

Advocacy in our country often gets a bad rap. Many believe that advocacy involves deep-pocketed, sleazy interest groups that pad representatives’ palms for their own benefit. I believe many people think that advocacy is only for a select few. The truth is: It is anything but. Advocacy is a right of all people. After 2018, I developed a keen interest in learning more and getting involved. That year, a wave went through the country to ban abortions in pregnancy after six weeks. Georgia was one of nine states to create and pass such an abortion bill. As I closely read and tracked the bill, the more I was appalled by its language. I intently followed the politicized attacks on those advocating both against as well as for the bill. The more I read, the more I believed that the voices of those whose very reproductive rights were at stake were not at the table. In my frustration, I began looking for ways to do something constructive. I no longer wanted only to watch the news passively or vent to my friends.

After some research, I discovered the Georgia Women’s Policy Initiative (GWPI), sponsored by the YWCA of Greater Atlanta, one of many organizations that advocate at both state and federal levels for special interest bills on behalf of their stakeholders. With support from the Ray C. Anderson Center for Sustainable Business, I applied to be a GWPI Fellow. The fellowship teaches women from all backgrounds in the state of Georgia about how to lobby and advocate during Georgia’s general assembly session. I was thrilled to be selected for the 2019-20 cohort. Over the course of a year, our group of 21 women met every other month. Each session provided an intense dive into a bill’s path to law. Legislative members and other facilitators also met with us to share ways to communicate effectively with political leaders before and during a general assembly session. This discussion-based learning was done in tandem with a hands-on learning component; we worked collaboratively in teams on a policy project that would impact the lives of women in Georgia. The members of this group amazed and inspired me. The women represented diverse backgrounds: lawyers, nonprofit leaders, community activists, and more. All of us shared the same goal: to learn how to amplify women’s voices.

Our fellowship was broken into smaller groups to focus on specific YWCA advocacy interests. My group took on the topic of “economic empowerment” and ultimately chose to advocate for the elimination of Georgia’s state tax on menstruation products. Many factors played a role in helping us to make that decision; a key factor was the growing momentum behind efforts to cut the tax. Currently, 20 out of 50 states do not tax feminine hygiene products (visit Tax Free. Period. for more information). In Georgia last year, a bipartisan bill to eliminate the tax was introduced. My group also had the great fortune to collaborate with Georgia STOMP—a statewide coalition to “stop tax on menstrual products.” The coalition’s past efforts have already moved the needle on providing menstrual products in schools and during state disasters. Our group learned more about the intricacies of where this bill stood in the Georgia General Assembly and was introduced to supportive state assembly members. Strategy plays a big role in passing bills because Georgia’s legislative session lasts only 45 days.

For me, the pinnacle moment of the fellowship was being recognized on the floor by state representatives. Many advocacy groups coordinate special days at the Georgia State Capitol to help bolster on-site advocacy. On February 19, our entire fellowship joined Georgia STOMP for the opportunity to speak with supportive legislative members. Immediately following that meeting, we were recognized on the floor of the Georgia House of Representatives as advocates for menstrual health. This experience was especially meaningful for me. First, it stood out as a culmination of my entire fellowship year. And second, it reminded me of my overarching goal: to be a woman fighting for equity. 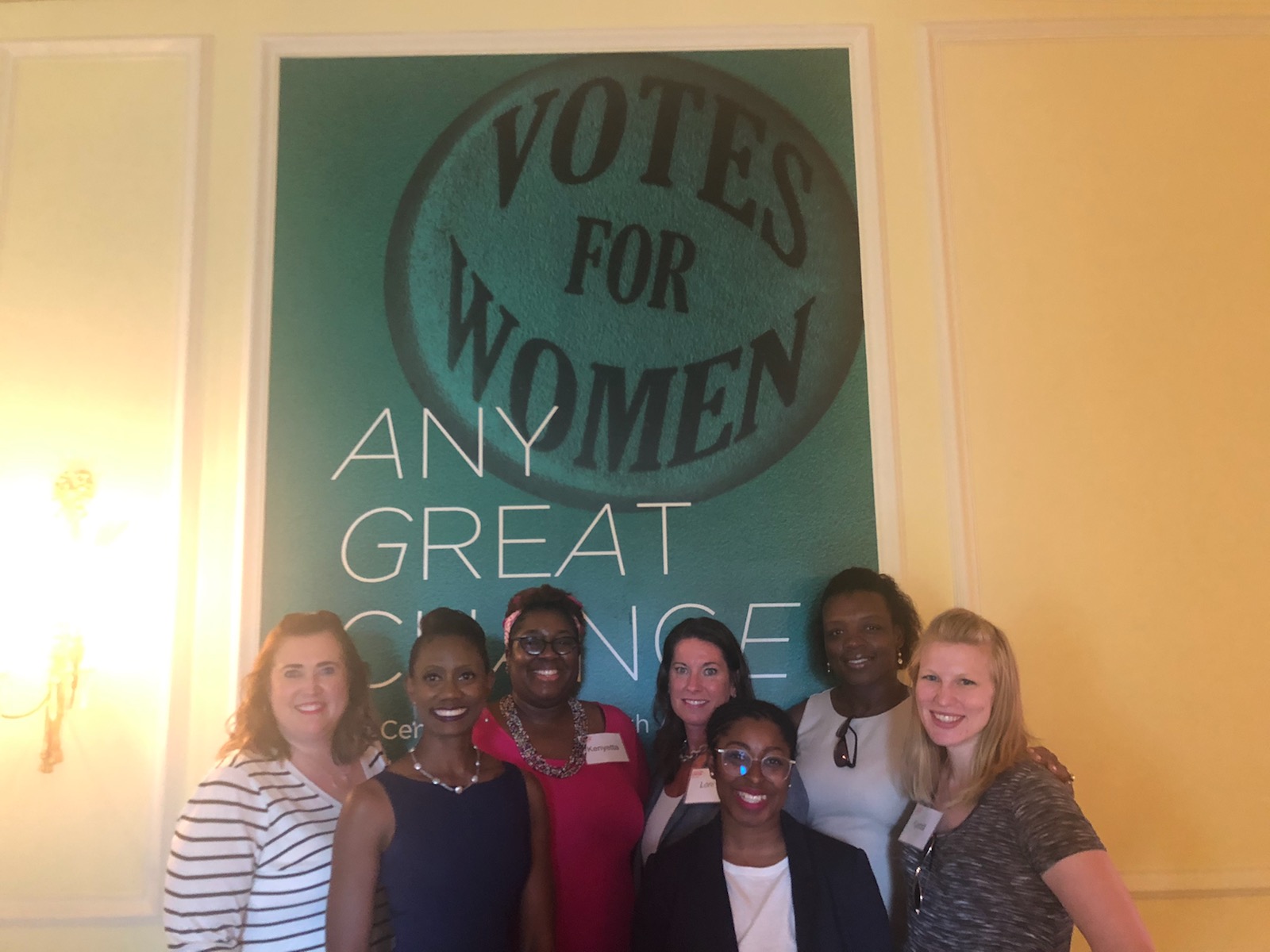 This year’s General Assembly session was unique in so many ways. It marked the 100th year since women could vote in the United States. It also followed on the footsteps of a grueling political year following the H.B. 481 controversy (the Georgia law that would have banned abortions after six weeks of pregnancy was blocked by a federal judge in July). Also, following an increase in Covid-19 cases, the legislative session was cut short for health and safety reasons. The session reconvened for ten days at the end of June to pass higher priority items, such as the state budget and outstanding bills deemed necessary for state operations in the coming year. Sadly, Covid-19 stalled our group’s efforts even as we pivoted our advocacy strategy around our bill. Despite this year’s unprecedented barriers that made advocating at the Georgia State Capitol particularly challenging, I am deeply committed to continuing my work with Georgia STOMP.

Established laws and policy are hard to change even when they are glaringly outdated. Thanks to my GWPI fellowship year, I have learned the value of advocacy in nudging the political system to entertain new ideas. I now feel as if I can make a difference with my individual voice. I learned how to follow a bill’s path in the assembly (hint, use this website). I am deeply appreciative of the YWCA and the strong, smart, and civic-minded women in my fellowship cohort. For future assemblies, I can now follow bills with a more practiced eye on what I feel is helpful to the people of our state. Though my group’s efforts to eliminate the “tampon tax” were not successful this year, I now have access to the resources I need to keep up the good fight. Gone are the days marked by venting to friends. Next time I get fired up, I’ll see you at the Capitol.

Kjersti Lukens is the program support coordinator for the Ray C. Anderson Center for Sustainable Business.