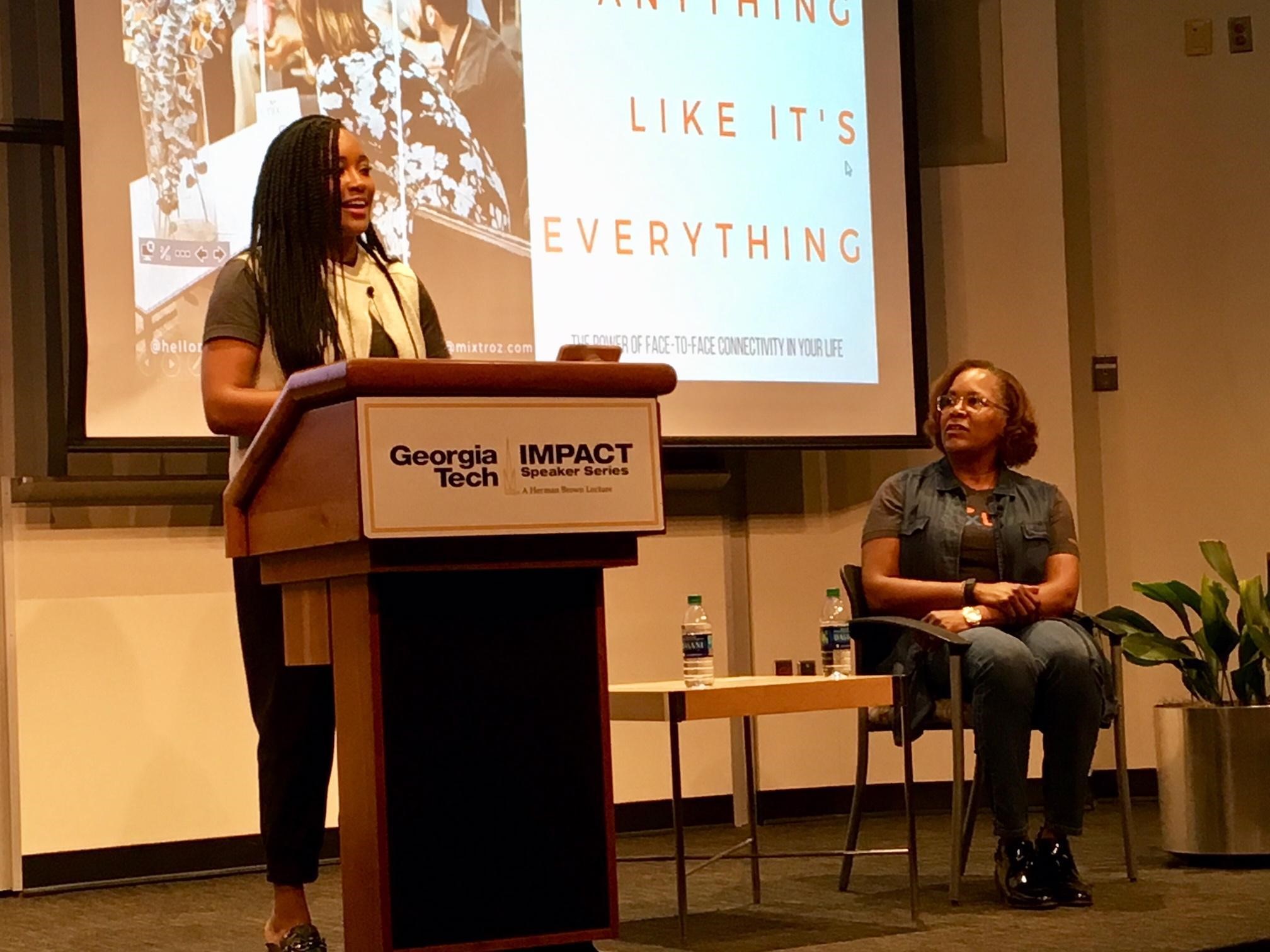 By their own account, mother-daughter, African-American co-founders of Mixtroz, Ashlee Ansen and Kerry Schrader, know the life of entrepreneurship.  Their fervent appetite for success and resolve to solve the next challenge has provided life-changing opportunities and a crucial career pivot.

Ashlee Ansen started the Impact discussion with her key takeaway, and the foundation for her entire business - face-to-face interaction is essential to business success. According to Harvard Business Review, Ansen quoted, a face-to-face meeting is 34-times more successful than an email. By her own life experiences, Ansen has proven that validity of that statistic.

Ansen began the conversation with a story from college, which revolved around a chance meeting with another student, who was her total opposite in every way. Recognizing the opportunity for growth in this experience, Ansen spoke with the student for a few hours, as a result, that person connected her with a role that would inevitably change her life, an internship with LeBron James.  In this role, Ansen put her motto to work: “treat anything like it’s everything.” Her ability to think quickly, multi-task and project manage led her to a successful profession in the multi-million dollar world of celebrity event planning.

However, while trying to gain entry to other event planning markets, Ansen identified a problem in the status quo of conference-level networking opportunities. She realized that at conferences and conventions there is little to no value for sponsors, networking is awkward for attendees, and no one profits at the end of the day. It was with this challenge in mind that Ansen developed her solution - Mixtroz.

Mixtroz is an app that allows companies to have meeting attendees download an app to utilize for networking. The app features a short survey that collects data for the host company, while creating effective networking groups for attendees, instead of the typical “free-for-all” method that often exists at conferences.

Ansen and Schrader are still funding the app and have been accepted to two accelerators to scale their model and move the technology forward. In this phase, the mother-daughter entrepreneurs have tapped into resources at Georgia Institute of Technology to further enhance and optimize their offering.

“Being the #11 MBA program in the country, Scheller College of Business at Georgia Tech was a valuable setting for us to test our technology, data collection, and algorithms,” Ansen explains. “Getting to test our technology in Professor Johnson’s Organizational Behavior class with over 180 students, not only allowed the students to network with each other and create bonds through our app, but we received insights and findings that we can apply to college campuses and extend into conferences throughout the country.”

Ansen and Schrader concluded the Impact session with a callout for all students to pursue entrepreneurial ventures noting “If they see a problem, develop a solution.” They provided tips and advice to students, graduates, and faculty about how to go after their business ideas while maintaining a work/life balance including:

Ansen and Schrader suggested the audience follow them on social media to keep up with Mixtroz by following the handle @hellomixtroz.

About the Impact Series at Scheller College

Since 2002, the Impact Speaker Series has brought highly-successful business and nonprofit leaders from a variety of sectors to Georgia Tech’s campus to share their experiences and give advice to students and other entrepreneurs on topics including "successful entrepreneurship in large organizations”, "socially responsible leadership", and "how to apply business principles to the social sector."

Upcoming speakers in the Impact series feature some of the country’s most successful entrepreneurs and business leaders, including Non-Executive Chairman of Delta Air Lines Board of Directors and Distinguished Executive in Residence for the Scheller College of Business, Frank Blake; NCR CTO, Eli Rosner; Executive Director of the Drucker Institute, Zachary First; and President of the Andrew W. Mellon Foundation, Earl Lewis.